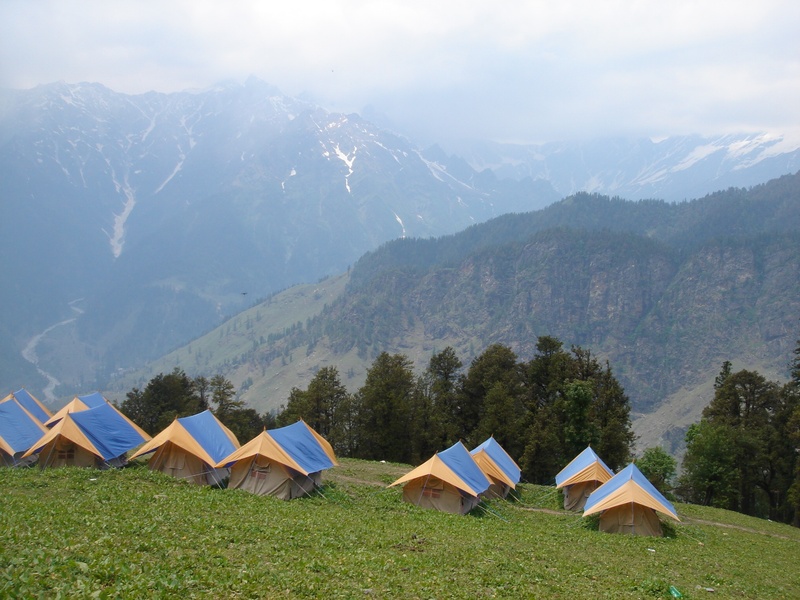 I'm in.. Batch 13 this year.. Just found out... MEA facilitates this trip every year and 20 batches if 30 people are picked from a draw of lots. I'm lucky..this year is extra special. One parikrama this year is as good as 12. Here's the link if you want to apply next year www.mea.gov.in/kmy.htm Keep U posted 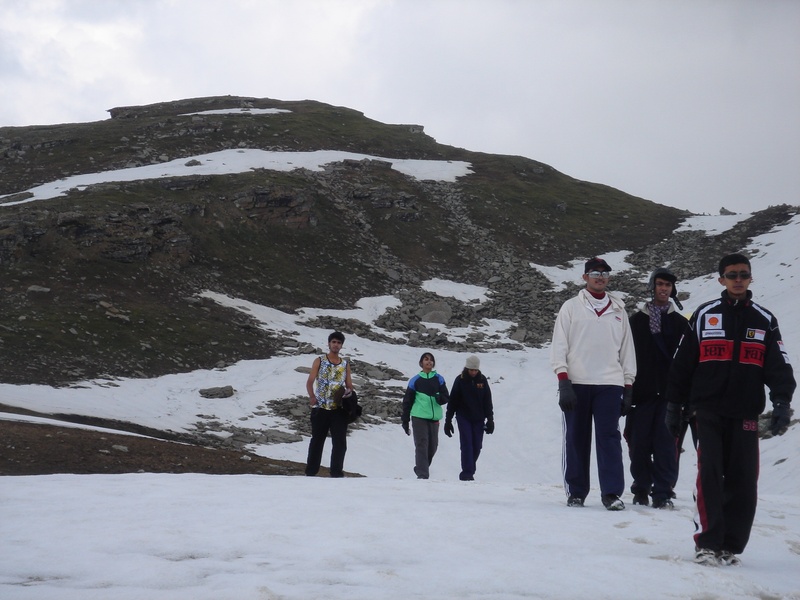 Vashisht is on the Manali- Rohtang Road, 3kmfrom Manali, less crowded and home to naturalhot springs. The drains of Vashisht are in a constant gurgle along thetemple boundary wall, steaming with boiling hot water. There’s a bath area inthe temple for the uninhibited. The sulphur springs are well known for theirmedicinal properties. The Vashist temple is the familiar wood and stonestructure common in Himachal Pradesh with intricate carving and a roof made ofslate.  However in keeping with the timesone sees more and more alluminium roofs – unaesthetic, but I suppose economicaland functional. An uncomfortable number of foreign tourists dot the area,several looking like they live there and could, with an air of imperiousness,tell you a thing or two about Vashist. Accordingly, the local eateries have adapted and do a great job withlasagnas, french fries, apple pies, cinnamon rolls and what have you.

Drive alongthe Vashisht- Rohtang road and you find a bizarre exhibition, all along theway, in little, numbered stalls. They fervently display “snow suits”, furcoats, bright coloured overalls, gum boots, all strung out with greatexpectations of a rental to the ever excited, endearingly gullible, happyfamily of Indian tourists who in their rented Sumos, throng this “highway”,which is in a perpetual state of insane traffic snafu. All this to see snow atRohtang pass.  However, once you getthere, you can see people throng the bhel-puri wala or the momo-wala ( inkeeping with the culture, you see).  Nowif your idea is to go to Brighu lake, you can completely avoid the melasituation above and stop after about 30 minutes drive from Vashisht, muchbefore Rohtang, at a place called Gulaba, with the omnipresent Dhabha, at thehead of the Brighu lake trail.

The trailtakes off east from the road. A 20 minute walk up the trail and you are ina  natural forest of fir, spruce, andKharsu oak, away from the Rohtang madness and in an excellent camping ground witha stream on your left. You may still be able to hear the distant traffic butthe white snow peaks cheer you up and the horses and sheep grazing in thenearby pastures calm you down and you can pitch your tent and soak in theatmosphere and decide to chill out and get to Brighu Lake the next day. But if you arestrapped for time and you want to do the express trek, so be it. Continue alongthe trail up, up and up along the meadows. An occasional Gaddi Shepherd may stop and exchange pleasantries.  Don’t ask him ‘Kitna Door hai”, he willinvariably reply ‘Age baraf hai, uske age Tal hai”. To a question “Kitna ghantalagega”?,  his philosophical answer wouldbe “Chalnewale ke oopar hai”.

After theconstant climb for about 2 hours, the trail eases out into a nice walk abovethe tree line and you can see the shepherd’s markers on top of ridges and alongthe trail as route markers. Flat stones are piled one on top of another to forma pyramid.  These are kept at vantagepoints to help shepherds and can be spotted even from a great distance.  The Himalayan Blue Iris was in bloom when Iwent in June.  There were other bright,colourful flowers infusing some cheer in the trek breaks or “breath-taking”breaks. After about an hour from the Shepherd’s marker, there are a couple ofcaves and rock overhangs if you want to camp at this level.

The weatherturned bad and light snowfall made visibility low.  But a small blue patch of sky at a distancegave enough reason for optimism.  Anotherhour of walking and just before the snowline, next to the last stream to becrossed, a large rock pointing west makes a good resting point and a visualtreat with snow covered undulations in the background. 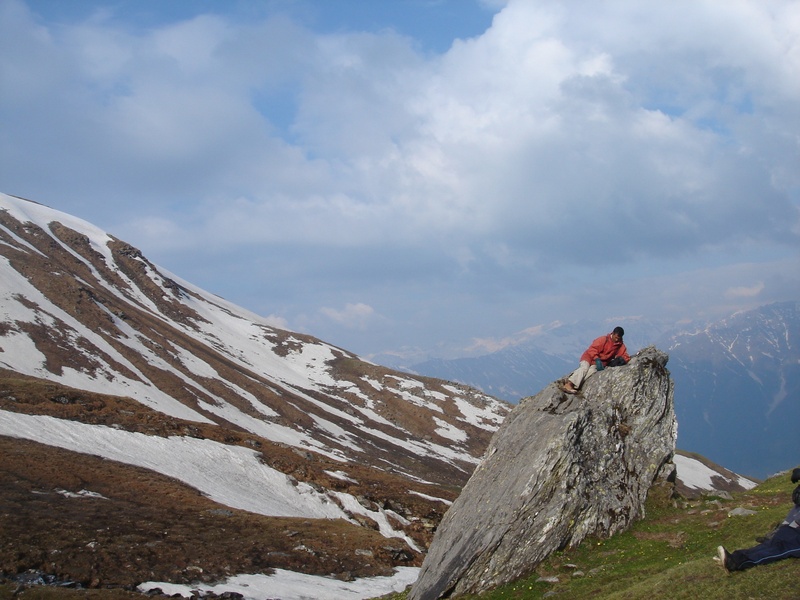 A 30 minutewalk from this rock and you can see Brighu pass ahead of you at a height on theright.  Water is available all along thetrail till you can see the Brighu pass and therefore many pleasant campingpossibilities. You can see a narrow trail skirting the snow covered slope infront of you.  The snow was not fresh andhad turned to ice.  Ice steps had to becut out as the trail was at a great height and a clumsy foothold could get you500 ft down an icy slide and beyond if you can’t stop. This low gradient, icytraverse took up one whole hour. There is a rocky resting area below the passfrom where it is a steep uphill climb to the pass (20 mins).  Once over the pass, there is a fantastic viewof the lake that takes your breath away. Snow peaks surround the lake and there is a 360 degree spectacular viewof the the Pir Panjal, Dhauladhar, the Lahaul triangle between the Chandra andthe Bhaga rivers makes for some seriously impressive photo shootpossibilities.  On a clear day, you caneven see the Spiti Range.

Legend hasit that Bhrigh Rishi meditated here, and that many local gods of the Kullu Valley, Guru Vashisht among them, visit totake a dip in its sacred waters. Bhrigu Lake is at an altitude of 4,235m and is considered a holyplace.  I had to take off my shoes andwalk on freezing ground to the frozen lake and the lake and I had our personalicebreaker exercise and became acquainted. The locals have a thanks-givingprayer and bring offerings to the gods. Prayer flags flutter on a knoll abovethe lake. Gulaba is at 9000 ft and Brighu lake is at 14000 ft, so the altitudegain is huge and it is not advisable to stay too long at the lake.

The walk back to Gulaba is very long and verydownhill.  You can take several thrillingsnow slide shortcuts to get to base faster. However, getting your base backsafe is more important. Sliding down, though absolutely a fantastic,must-do-it-at-least-once-experience, is not completely without risks.  Take some risk analysis advice from yourlocal guide on this. Once on the meadows, you wait to get to Gulaba which seemsto be an elusive destination. If you are carrying your own tents, it’s a goodidea to camp in the high altitude meadows and put off getting to civilization.

Start a Free Blog at Webs.com